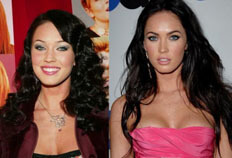 An “it girl” if there ever was one, Megan Fox (Transformers, Jennifer’s Body) is quickly growing accustomed to one of the rights of passage most celebrity starlets seem to face these days: accusations of using plastic surgery to generate her magazine cover looks. As recently lampooned during her guest hosting appearance on Saturday Night Live, there are thousands of photos of Megan Fox currently circulating on the internet, many of them doctored by people with way too much time on their hands. It’s the legitimate so-called “Megan Fox before and after photos,” however, that have garnered a lot of interest on some blogs in recent months. Many fans (and many people suffering from Megan Fox fatigue) are using these pictures as evidence that Hollywood’s fastest rising star isn’t all she appears to be.

None of this speculation should come as any surprise, of course. These days, the majority of celebrities have undergone at least some form of cosmetic enhancement, from Courtney Cox’s Botox treatments to Denise Richards’ breast implants. And many of them freely admit getting these treatments now as just another part of keeping up with the aesthetic demands of show business. Remember Jennifer Aniston’s famous nose job? Even Megan Fox’s “it girl” predecessor Angelina Jolie has been constantly connected with cosmetic enhancement, including lip augmentation and breast augmentation. The truth is, cosmetic surgery is a welcome option for countless women and men in the public eye. So, first and foremost, if she underwent plastic surgery, Megan Fox hardly has anything to apologize for.

As to that issue, though, a lot of the rumors about Megan Fox’s cosmetic surgery past seem to be little more than that— rumors. Most of Fox’s physical changes can actually be explained quite easily by one inarguable fact: she’s only 23 years old! Some of the Megan Fox before and after pictures floating around the net are trying to make their case by juxtaposing a recent photo of Megan with another taken in 2004. Well, most of us would be hard-pressed to recall a woman who looked exactly the same in high school and she did after college. The body is still developing during the late teens and early twenties, including facial features. Often, rounded features associated with childhood are still working their way out during this time period, helping to explain how Fox’s facial features have become more sculpted and tighter over the last few years. Still, does this mean that the Megan Fox plastic surgery police have no further case to be made? Well...

One of the most popular rumors about Megan Fox is that she underwent a rhinoplasty procedure (nose job before her breakout role in Transformers. While it’s hard to present undeniable evidence for this (due to the factors mentioned above), it’s also hard not to notice the considerable change in the size and shape of Fox’s nose as presented in these before and after photos. Are they doctored? Is it just a matter of bad lighting, shadows, strange angles? Who knows? But for people eager to take the red hot star down a notch, any notion of imperfection is apparently worth exploring.

Like Angelina Jolie before her, Megan Fox is also a constant focus of lip augmentation and breast augmentation rumors. The idea that no woman could look that good naturally hardly serves as its own evidence, but photos do seem to indicate considerable enhancements in Megan’s lips and breasts over the past few years. Of course, like Angelina, Megan has denied she turned to plastic surgery for either of these areas, and considering her youth, there is little reason to doubt the possibility that she is the real deal. Late blooming is a perfectly reasonable explanation in Fox’s case. It’s true that many actresses turn to plastic surgery for an upper hand on getting their first break, but trends don’t prove an individual case any more than some questionable photos do.

On the off chance that Megan Fox has undergone Botox treatments, a lip augmentation, or breast enlargement, she certainly shouldn’t hesitate to come clean about it. For women who’ve undergone plastic surgery or are currently considering it, Fox could be a good remodel for how to keep a procedure tasteful and natural looking by staying within the contours of one’s own body—something the doctors in our plastic surgery network are constantly encouraging with their patients. If, however, she is all-natural as she claims, Megan Fox has merely set the bar a little bit higher for any aspiring actress hoping to be the next Hollywood “it girl.”