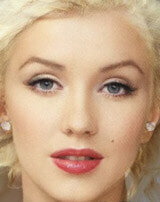 Marilyn Monroe’s beauty enchants audiences today as it did audiences sixty years ago. Monroe epitomizes the glitz, glamour, and bombshell beauty of the silver screen that continues to seduce generation upon generation of movie lovers. Of course, like many starlets, Monroe’s looks were reportedly a combination of great genes and, yes, a bit of cosmetic enhancement. While many people tend to think of plastic surgery as a relatively recent phenomenon, the truth is that surgical enhancements have an established history in Hollywood—yes, even in your grandmother’s day, those classy movie stars knew where to go to improve their looks. Monroe was a cosmetic surgery pioneer, setting a precedent for Hollywood’s leading ladies to indulge in the benefits plastic surgery can provide.

It may be difficult for us to believe that Monroe had cosmetic surgery on her face, as few of us could imagine her without the iconic mug we’ve always known. Yet, the actress reportedly underwent a rhinoplasty in 1946, when she first signed with Twentieth Centry-Fox Studios. Before and after photos show a distinct difference in the shape of her nose, which went from bulbous to slender. Her new nose seemed to symbolize an overall transformation for her, which was also marked by her name change from Norma Jean to Marilyn.

Monroe is also rumored to have had a chin implant. How long this implant lasted, however, is unclear, as it eventually dissolved. The actress’s curvaceous figure seems to have been all hers, though—there are no reports of breast enhancement, or other such surgeries.

Even though modern audiences tend to associate plastic surgery with women like Tara Reid, Anna Nicole Smith, and Ashlee Simpson, rather than classic icons from old Hollywood, Monroe was on the cutting-edge (no pun intended) of physical enhancements. Her beauty wasn’t, in fact, all natural, but aided by the work of a skilled plastic surgeon. Hollywood’s starlets have learned from women like Monroe that it’s perfectly acceptable to enhance your natural beauty with a little cosmetic surgery. In the quest to look gorgeous on camera, on stage, and in the tabloids, women have continued to seek that added boost from plastic surgery. After all, Monroe’s beauty has gone down in history, and for any modern starlet, that’s an achievement quite worth chasing.

To learn more about how modern plastic surgery is making it easier for women to reach their aesthetic goals affordably and tastefully, contact us today for a consultation with a doctor in your area.