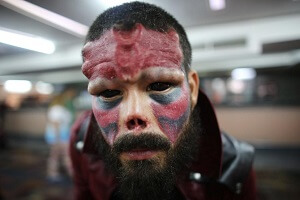 The reason Henry Damon went to plastic surgery extremes to look like Red Skull is secondary to the art of cosmetic surgery and how perfect precision can carve cartoon like features from a human face.

Creating a layered forehead through numerous subdermal implants and having part of his nose removed, surgeons have shifted and molded Damon’s face into an evil Marvel comic character.

The Science Times reports that the 37-year-old Venezuelan’s very first procedure was tattooing his both black and red and inking his eyes all black.

“But before undergoing this extensive surgery and implants, Damon went through several physical and psychological tests, according to Emilio Gonzalez, a tattoo and extreme body surgery specialist,” reports The Science Times, adding Gonzalez confirmed Damon, “aka Red Skull is physically and intellectually a healthy person.”

As Captain America’s nemesis, Red Skull is a Nazi agent supervillain that stops at nothing to destroy the patriotic hero. Going from a 1947 comic strip to 2011 silver screen Marvel film, the evil character can be seen as one of the stars in Captain America: The First Avenger. According to Gonzalez, Damon may look fake but still lives a very real life.

“He’s an excellent son, husband and father, who has an extreme taste for body modifications,” said Gonzalez in Huffington Post report.

Gonzalez says that this is not the end of Damon’s transformation, and that they are about to take it even further.

“Next will be silicone implants on the cheekbones, chins and cheeks. Then we will tattoo his entire face red and then he will be Red Skull,” he said.

Damon’s childhood friend told the Daily Mail Damon has been fascinated with the Marvel character since his youth.

“He has loved comic books since he was a kid and always dreamed of being Red Skull, but never got round to doing it,” said Pablo Hernandez.

Though there are no news reports that share how the father of two feels himself on the transformation, it can be assumed he loves Red Skull as much as humanly possible.