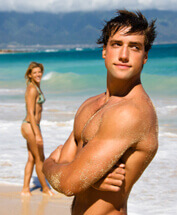 The reasons men undergo liposuction are often the same as for women—to maintain an attractive, athletic physique, to remain competitive in the career world, and to offset the physical aging process. The increased pressure on the modern man to stay looking young and fit has caused a jump in male cosmetic procedures across the board.

Men are not just undergoing liposuction and nose jobs with more regularity, they are becoming more frequent users of Botox injections, laser hair removal, and facial fillers like Restylane as well.

One big difference between female and male liposuction is in the treatment areas that are commonly chosen by each gender. Whereas females prefer to get liposuction mostly in lower body areas like the stomach, thighs, hips and buttocks, male liposuction patients tend to undergo liposuction more on the abdomen, neck and chest regions.

Neck fat can become an issue for men and women alike as they get older. Since the facial and neck areas are often neglected in standard exercise routines, the skin and muscle tissue of the lower face and neck can be especially prone to drooping, sagging skin and excess fat as we age. Often referred to as a "double chin," neck fat is a popular target for male liposuction surgery. Neck liposuction for men may or may not be combined with a facelift depending on the patient's status.

Male chest liposuction is most often used to treat gynecomastia, a condition classified by enlarged male breast tissue. Since an endowed chest is most often associated with feminine curves, men with enlarged breasts can be particularly sensitive to and embarrassed by this condition. Male chest liposuction can be performed alone, or as part of a more extensive male breast reduction surgery, complete with excess skin excision and the tightening or adjusting of chest muscle ligaments.

To eliminate the risks of male liposuction as much as possible, prospective patients should properly research male liposuction beforehand, meet with a board-certified plastic surgeon to evaluate their candidacy for male liposuction, and follow all pre-liposuction instructions and post-op directions given to them by the practicing surgeon.

Similarly to women, male patients' liposuction candidacy can be determined by body fat percentage and/or BMI, pre-existing medical conditions, current prescription medications, and other personal factors such as the presence of a hernia.

Many prospective patients are unaware that male liposuction can be both more difficult and more costly than female liposuction. This is primarily due to physiological differences between male skin tissue and fat cells versus those of women.

For one thing, women naturally have a higher percentage of adipose tissue or body fat than men do, which makes female fat cells easier to target and remove during liposuction. Additionally, men have a dermis layer that's richer in connective or fibrous tissues, such as collagen fibers. Connective tissues aren't meant to be removed through liposuction, and must be carefully worked around during surgery. Between their lower body fat percentage and their more densely fibrous skin tissue, male liposuction patients can pose a greater challenge during surgery.

Is Male Liposuction Right for Me?

As briefly mentioned earlier, the best way to ascertain your personal options and candidacy for male liposuction is to consult with a board-certified liposuction surgeon in your area.

Schedule a consultation with a top rated surgeon like these liposuction surgeons in Portland.