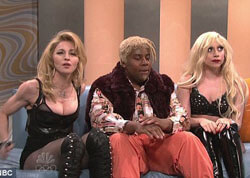 They’re two powerhouses of pop, but when it comes to Lady Gaga and Madonna, plastic surgery rumors seem to follow them around as often as the paparazzi.

In a recent episode of Saturday Night Live, musical guest Lady Gaga crossed paths with Madonna during a surprise bit on one of the show’s recurring sketches, “Deep House Dish.” Considering Madonna’s iconic status and Lady Gaga’s place as one of the top pop stars of the moment, one would assume that their staged catfight would have generated a huge reaction from the audience. What it really did, however, is reveal just how hard it is to recognize Madonna these days, let alone her easily caricatured counterpart Lady Gaga. Throughout much of the sketch, the crowd seemed unsure if they were watching the real Gaga and Madonna mix it up, or merely a pair of SNL cast members impersonating the platinum blonde celebrities.

The whole episode certainly got the blogosphere buzzing again about those ever present plastic surgery rumors surrounding the Queen of Pop and her possible heir apparent. At the age of 50, Madonna suddenly looks like she’s stepped in the way-back machine to the early ‘90s. While no one has ever questioned the Material Girl’s physical fitness regimen and impressive physique, it’s quite clear that at least some of her appearance required some outside assistance. Specifically, her vibrant, wrinkle-free face has had some wondering whether Madonna underwent a facelift in the past year (similar rumors have connected her with a blepharoplasty or eyelid surgery, as well). On closer inspection, though, it’s just as likely that Madonna is just the latest celebrity to turn to non-surgical facial rejuvenation techniques. It may have been a series of Microdermabrasion treatments, IPL Photofacial, or the ever popular Botox. A laser skin resurfacing treatment is also a likely culprit to have produced the results apparent on her SNL appearance. Whatever her treatment of choice, Madonna has certainly found the fountain of youth yet again.

Even before her latest transformation, Madonna has been linked to plastic surgery rumors many times before. In her earlier days as a rising pop starlet, many presumed that she’d undergone a breast augmentation, and similar rumors popped up again two years ago, when photos drew speculation that Madonna had gotten a breast lift.

While she’s only been on the public’s radar for about a year, Lady Gaga can certainly relate to Madonna’s plastic surgery past. The diminutive club singer has been connected with a laundry list of plastic surgery rumors, ranging from a pretty well confirmed and tastefully done rhinoplasty operation (nose job) to possible chin augmentation, lip augmentation, and breast augmentation. There have even been some bizarre, completely unsubstantiated rumors that Lady Gaga was a hermaphrodite, and that she underwent plastic surgery to remove her male sex organs! Ugh. The tabloids never quite know when to say when. In any case, despite her insistence on going essentially pants-less in her performances, Lady Gaga has managed to avoid any liposuction rumors to this point.

It’s doubtful than Madonna and Lady Gaga spent the rest of their Saturday night chatting about their various cosmetic procedures, but as role models for millions of women, they’ve certainly continued a show business trend by embracing new technologies and treatments to improve aesthetic imperfections and rejuvenate their skin. Will Madonna still be turning heads at 60? Will Lady Gaga go from “quirky pop star” to “sex symbol”? Only time will tell, but it’s safe to assume the plastic surgery rumor mill will keep on rolling.


If you're interested in finding out if Lady Gaga and Madonna's cosmetic procedures of choice might help you in a similar fashion, a consultation with a local plastic surgeon can resolve any of your unanswered questions and help you decide if plastic surgery or a non-surgical alternative might be right for you. Contact us today