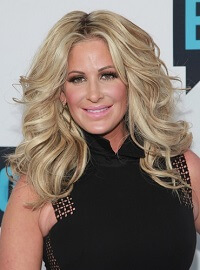 Pop culture enthusiasts are constantly speculating on celebrity plastic surgeries, so it’s refreshing when stars come forward and speak openly about the procedures they've had performed. Recently, former "Real Housewives of Atlanta" star and "Dancing with the Stars" contestant, Kim Zolciak, opened up about her cosmetic surgery experiences and the secrets she has to looking and feeling great.

In the social media age of Twitter and Instagram, stars tend to be a bit more open about their plastic surgeries, and Kim Zolciak has spoken about some of her procedures in the past. For starters, she has been open about her breast augmentation that she received some years ago. Recently, however, Kim opened up about the tummy tuck that she underwent after her twins were born in the fall of 2013. The procedure, she claims, was tighten up the skin around her stomach following a hernia that developed during her pregnancy.

While Kim hasn't been entirely forthcoming about all of her cosmetic enhancements, experts generally agree that the 37-year-old mother of six has also had Botox injections and dermal fillers to plump up and smooth the skin around her face. Additionally, it seems that she has also had veneers installed on her teeth.

Kim's fans (and her haters) have been vocal in discussing the other procedures that the star may have had over the years, and at the top of the list is a nose job. Pointing to pictures of Kim from years ago, onlookers claim that her nose nowadays is thinner and angled upwards, both sure signs that she has had rhinoplasty work done. Kim, however, has long denied these rumors.

Similarly, experts and pop culture watchers also claim that something mysterious is happening with Kim's chin, which appears slimmer and more angular than it did in the past, suggesting that perhaps she received a chin implant. But again, the former "Real Housewives" star isn't spilling the beans on that particular procedure.

Despite the swirl of plastic surgery rumors, one thing is for sure: Kim looks stunning on camera. And ultimately, her striking appearance may not have as much to do with plastic surgery as you may think. In fact, Kim herself points to her genetics as the source of her good looks and toned body. Additionally, Kim claims to stick to a small-portion diet, not going overboard with her meals, snacks or desserts.

But as far as future plastic surgery procedures, Kim isn't ruling them out. In fact, she claims that she'll continue to undergo minor nips and tucks as needed to maintain her appearance. And when you spend as much time in front of the camera as she does, who can blame her?