Kim Kardashian Wants to Lose Pregnancy Weight at Any Cost 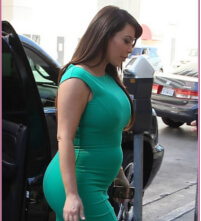 Kim Kardashian may be happy with her new baby but the same cannot be said for her baby belly. The nearly 35-year-old media personality is purportedly prepared to shred her pregnancy weight at any cost, even at the cost of her current relationship with rapper Kanye West.

Let’s face the facts; pregnancy weight gain is unavoidable and the impact on the woman’s body can be quite extensive. While it is important not to indulge to excess, some weight gain, although difficult or awkward, is absolutely vital for the baby's growth and development.

For some pregnancies, the accumulated weight dissipates relatively quickly after the pregnancy. Most mothers typically lose half of their pregnancy weight gain within the first month and a half after delivery. However, sometimes, the process takes much longer. For Kim Kardashian, soon is not soon enough.

Just three months after delivering little Nori “North” West, the media-centric Kardashian is reportedly not at all content with her post-pregnancy body. Wasting no time on gradual weight loss through diet and exercise, Kardashian is purportedly gearing up for a massive cosmetic makeover. According to the September 30th print edition of Life & Style magazine, Kim is considering options for a tummy tuck, liposuction, a breast lift, and a slew of other expansive procedures and treatments to diminish the natural sagging and stretching caused by motherhood.

Although Kanye undoubtedly wants his baby mama to remain a hot baby mama, it is not without some restrictions. Kanye’s own mother, Donda West, died from surgical complications in 2007 after receiving cosmetic procedures in spite of being refused by one surgeon already. Kanye’s supposed stance on plastic surgery, given the tragic events of his mother’s passing, may cause considerable friction between the media couple.

Approval from Kanye West may or may not be the deal breaker one might assume. What Kim wants more often than not is what Kim gets. According to unidentified Life and Style source, “the way she looks is the most important thing to her,” even if that means going against health issues or the sensitivity of others.

Keeping Up with Yourself and Not the Kardashians

Women should not feel pressure to from others as an excuse to get plastic surgery, not should it come from the desire to be famous. A person deciding to receive cosmetic surgery should receive the procedure to contribute to his or her well being!

If you have recently given birth to a child and are interested in knowing more about post-pregnancy plastic surgery, contact one of our representatives today. We can provide you with options, based uniquely on your exact needs and expectations. Call us today and get started!