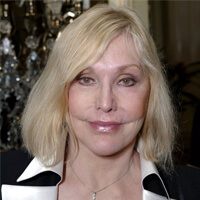 81-year-old Actress Kim Novak, best known for her starring role in Alfred Hitchcock’s Vertigo, caused a bit of a stir with her appearance at the 86th Academy Awards ceremony. Onstage with Matthew McConaughey to present two awards, Novak’s face showed signs of multiple plastic surgery procedures which significantly altered her appearance. It even appeared as if the work she had done made it difficult for her to speak. Twitter and other social media sites blew up, mostly with shocked or snarky reactions. So what did Novak have done?

“In her heyday, in Alfred Hitchcock films, 81-year-old actress Kim Novak was a great beauty. While it is not fair to compare an 81-year-old woman to look as she did in her 20's or 30's, Kim Novak’s face at the Oscar’s bears no resemblance to the face of her youth. Her younger face was dainty and feminine. She had a small pointy chin, defined cheek bones, and a Cupid’s bow mouth.

“Ms. Novak’s face at the Oscars looked masculine and overinflated. It appears as if she had a facelift at some point, which widened the shape of her upper face. In addition, it is abundantly clear that too much filler has been used in her checks [sic]. Filler has also been used in her naso labial folds but the result has been uneven. The filler did its job on the left side but there remains a distinct crease on the right.

“What is most striking is her chin. It does appear as if she had a chin implant, which seems to be the only way to explain how she morphed from a dainty feminine chin to the masculine chin she has today.”

Another Beverly Hills plastic surgeon, Brent Moelleken, told HollywoodLife.com, “Ms. Novak has apparently had silicone injections or overaggressive fat injections to her face. Either can be disastrous and irreversible.” Dr. Moelleken elaborated that depending on what sort of cheek fillers Novak received, the change may only be temporary; the effects of some fillers, such as Juvaderm, are not permanent. Dr. Moelleken added, “Hopefully she was just overjealous [sic] with those, and didn’t have fillers like silicone or ArteFill, which never go away, unfortunately.”

Dr. Adam Schaffner, also a Beverly Hills plastic surgeon, adds that some of the cheek effects could just be due to the recency of the procedure, explaining to HollywoodLife.com, “It depends on the volume of the fillers. It could definitely be swelling, if it’s a recent injection.” Speaking about the other work Novak may have had done, Dr. Schaffner concurred with Dr. Bruno about the chin implant, saying “The angulation of her chin, the size of her chin is notable different. I would suspect that she’s had some sort of chin treatment.”

All three doctors seem to agree with the general public perception that Novak went overboard with her cosmetic procedures. As Dr. Moelleken told HollywoodLife.com, “Most Hollywood ladies who ‘age gracefully’ actually do so with subtle plastic surgery that keeps them looking younger and ‘refreshed’. If they try too hard to look much younger than their age, they will have a bad result.”

For more information on plastic surgery news and procedures, visit plasticsurgeryportal.com or contact us for a free consultation.