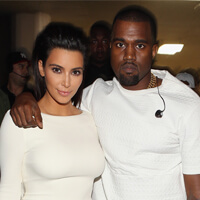 What happens when a media celebrity obsessed with preserving her famous looks ends up hooking up with a performer with a control problem, who is vehemently opposed to plastic surgery? The nearly 35-year-old Kim Kardashian is purportedly prepared to maintain her physical appeal at any cost, even at the cost of her current relationship with rapper Kanye West.

Eager to sustain her media celebrity, Kim Kardashian may want to continue indulging in various plastic surgeries and procedures. However these cosmetic touch-ups are reportedly a touchy subject for Kardashian’s current partner Kanye West.

Rapper’s Delight? Not so Fast

Although Kanye undoubtedly wants his baby mama to remain a hot baby mama, it is not without some restrictions. Kanye’s own mother, Donda West, died from surgical complications in 2007, after receiving cosmetic procedures in spite of being refused by one surgeon already. Kayne’s supposed stance on plastic surgery, given the tragic events of his mother’s passing, may cause considerable friction between the media couple.

Approval from Kanye West may or may not be the deal breaker one might assume. According to PerezHilton.com, a source close to the Kardashian family has stated, “Kim was certain that she wanted to have surgery after giving birth because she wanted a head start on losing her baby weight. He really flipped out. Kanye told Kim in no uncertain terms that she needed to put her baby and her life first. He got pretty emotional because he really didn’t want her going through that kind of major surgery. He’s still traumatized from his mom’s death.”

The constant media scrutiny of the couple has not helped either individual deal with the stress of the limelight they have created for themselves. The same source has indicated that the pressure of Kim to seek out fame and weight-loss has been anything but easy:

“Kim has had a much harder time losing the baby weight than she ever anticipated. She works out extremely hard and everyone said she would shed the weight fast, but it just hasn’t happened. Kim is telling everyone that she doesn’t want to go out in public unless she absolutely has to, because she’s still too self-conscious of her body. She keeps saying that she doesn’t want to have to look at ‘fat’ pictures for years”

Reality for the Rest of Us?

A person deciding to receive cosmetic surgery should receive the procedure to contribute to her or his well-being and assist her or him in feeling empowered to do what he or she is capable of doing. If you have recently given birth to a child and are interested in knowing more about post-pregnancy plastic surgery, contact us one of our representatives. We can provide you with options, based uniquely on your exact needs and expectations. We can schedule you with a free consultation to meet with a board-certified specialist to discuss your opportunities. Why delay – Call us today and get started!