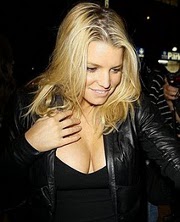 Jessica Simpson has always been a busty gal, but recent rumors report that the buxom popstar may be considering breast reduction surgery in preparation for her wedding to NFL player Eric Johnson. Some sources have said that Simpson believes downsizing her famous breasts could make her upper half look smaller on her big day. And after the incessant coverage of Simpson’s weight loss struggle in the tabloids, a surgical boost might just give her the confidence she desires.

During breast reduction surgery, incisions are made on the breast so that excess fat, tissue, and skin can be removed. It can be challenging to properly contour natural breasts evenly, so breast reduction is best left to board-certified plastic surgeons with experience performing the surgery. The recovery period following breast reduction is notoriously lengthy and can be quite painful, and that makes it unlikely that Simpson is truly considering the surgery. Bruising and swelling may subside in a couple of months, but full recovery from scarring can take up to a year. It’s doubtful that Simpson would risk the possibility of telltale scars on her wedding day.

Representatives for Simpson have declined to comment on the rumors, but friends have said that the star has no plans to get breast reduction surgery and hasn’t even set a wedding date yet. Men, breathe a sigh of relief: it doesn’t look like Simpson’s famous assets are going anywhere. For now, it seems as though Simpson is happy with the size of her breasts. Her curvy figure has certainly gained her a loyal following—just ask her father, who famously told Page Six in 2004 that “Jessica never tries to be sexy. She just is sexy. If you put her in a T-shirt or you put her in a bustier, she’s sexy in both. She’s got double Ds! You can’t cover those suckers up!”

Jessica Simpson has been relatively off the media radar following a messy divorce with former husband Nick Lachey. But while the teenage girl demographic has been tuning in to Jersey Shore rather than Newlyweds, Simpson has been raking in massive profits thanks to her successful fashion line. Her eponymous brand of shoes, clothing, jewelry, handbags, eyewear, and more have given Simpson a small empire—at least within the confinement of Nordstrom. Her most recent media venture suggests that she has been affected by the scrutiny of her appearance by the press, as VH1’s The Price of Beauty follows Simpson as she travels around the globe to discover beauty standards in foreign countries.

Breast reduction may not be the answer for Jessica Simpson, but many patients have found the surgery helpful at reducing physical pain and emotional stress. If you’d like to learn more about breast reduction, contact our representatives today. We’ll help you schedule a private consultation with a board-certified plastic surgeon in your area.