Heidi Montag Before & After: Her Plastic Surgery Timeline 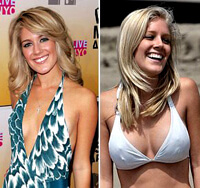 We certainly aren’t about to suggest that former Hills star and current “pop singer” Heidi Montag needs any more attention that what she already wrangles together for herself. Still, for better or worse, Heidi has become a proud poster child for modern plastic surgery over the past year, having undergone as many as ten procedures in one day alone (one need only search for "Heidi Montag Before and After Pictures" to find hundreds of examples of the results). From one point of view, you could say that Heidi Montag gives plastic surgery and plastic surgeons a bad name—reinforcing unfair stereotypes of excess and shallowness and distracting the public from the millions of women who undergo cosmetic procedures to genuinely improve their self esteem and day-to-day lives. From another view, though, Montag might at least help the cosmetic surgery industry in one respect. Her multiple surgeries, and the ease with which she underwent and recovered from each one, does reveal just how safe, quick, and easy many of today’s plastic surgery procedures have become.

Sure, not all of us have the bank accounts of a Heidi Montag. Most of us would never feel inclined to undergo dozens of procedures, either. But the fact is, no matter what your cosmetic goals are or what your budget might be, achieving the look you want has never been as more attainable than it is today. There will always be physical traits that bother us and that won’t go away with dieting or exercise. Men and women alike turn to procedures like liposuction to help remove large fat deposits. People who feel self conscious about a misshaped nose or sunken eyes may elect to make a change, as well. And every year, more and more women decide to either increase or decrease their bust line with breast augmentation and reduction procedures. Everyone’s reasons are different, but in the end, it’s everyone’s right to do something that can improve their confidence and well being. Even Heidi Montag—- role model or not—- shouldn’t be criticized too much for her self-described “plastic surgery obsession” or her endless string of new before and after pictures. For her, the goal is to create the look of a pop starlet in the Britney Spears or Christina Aguilera mold. And if her procedures have gotten her closer to that personal goal—-which they seem to have done in every respect but the vocal chord level—- it’s hard to argue with her motivations. She’s doing what makes her happy, and the risks have proven minimal.

If you’re a loyal Heidi Montag fan, a devoted hater, or simply someone curious about how any young woman could choose to undergo ten plastic surgery procedures in a day, here’s a closer look at Heidi’s cosmetic history, including each nip and tuck along the way to creating her current blonde bombshell image. With a board-certified plastic surgeon on your side, you could easily follow a similar surgical regimen to Heidi herself. However, we strongly recommend you follow your own aesthetic goals and keep things simple. Plastic surgery obsession can actually become a serious problem for some people, which is why these procedures are best suited to those with specific, reasonable improvements they wish to make to their appearance-— rather than dramatic head-to-toe transformations.