Has Gaga Gone Under? 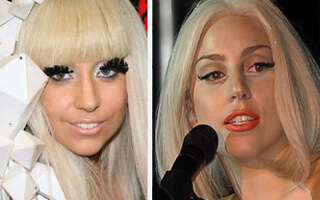 The knife, that is. Photos of the 27-year-old singer's nose looking much thinner than before at her recent performance at the TriBeCa Pride Rally in New York June 28 fueled speculation that she may have undergone cosmetic surgery.

With songs like "Born This Way" promoting the importance of appreciating yourself the way you were... well, born- Lady Gaga has always scorned celebrities who have had cosmetic surgery to change their physical appearance.

However, it appears that the pop artist herself may no longer like the way she was born. The rumors are stinkier than her meat dress after a week in the closet.

The plastic surgery rumor-sparking photos came as she performed for the first time since the hip surgery she underwent back in February to deal with a labral tear on her right hip. Under strict doctor's orders, the "Bad Romance" singer was forced to take six months off from performing and cancel the remaining dates on her ‘Born This Way’ tour.

It seems as though Gaga may have had an extra procedure during her hiatus from touring.

The Story Behind the Star

The 27-year-old has not always been a revered icon among the masses, of course. Early in her career, Gaga was ridiculed for the shape of her nose. Recently she revealed that she was relentlessly bullied growing up.

In a recent documentary, Lady Gaga: Inside the Outside, produced by MTV, Gaga told a story about being bullied as a child. The star claims that the story, which involved several boys throwing her into a trashcan, helped form who she is today.

Gaga has struggled with body image herself before. The songstress has admitted to her own battles with bulimia and anorexia since the age of 15.

Her nose has been a source of negative body image, and even bullying, since she was young. However, the singer has always vowed that she would never go under the knife to change it.

""I have never had plastic surgery and there are many pop singer who have," Gaga promised 'Harper's Bazaar' back in 2011. I think promoting insecurity in the form of plastic surgery is infinitely more harmful than an artistic expression related to body modification," the pop singer further explained.

The photos speak for themselves and it seems that Gaga may have changed her stance on the harmful effects of cosmetic surgery.

It appears that even the most resilient celebs find themselves in the plastic surgeon’s waiting room. If you are curious about your options for cosmetic enhancement, please contact our team of representatives today. They will help you locate a board-certified plastic surgeon or clinic in your area today!