Has Putin Been Puttin' Some Botox in His Face? 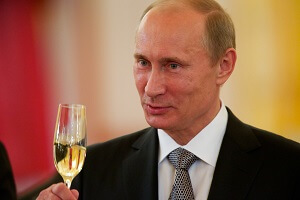 Not nearly as noteworthy as whether or not a Hollywood starlet went under the knife, Russian President Vladimir Putin is causing a stir since reappearing in public after a 10-day stint of silence.

“During his mysterious unannounced sabbatical, rumors swirled that he was sick, or dead, or attending the birth of another secret baby with his very-not-secret rhythmic gymnast mistress,” reports Jezebel. “But our favorite theory is the one where Putin went into hiding so he could get some plastic surgery on his craggy old face.”

Getting right to the satirical point, the beauty periodical does not hold back. “If the Russian rumors are true, Putin wouldn’t be the first world leader to go under the knife,” reported the paper. Grabbing at the gossip, Gawker blatantly reported in 2011 that at an “elections-related appearance, he looked like Rachel Zoe. Fillers, I'm thinking, plus Botox on the forehead.”

Though this information is not new, according to the Huffington Post, reporting obvious changes in the president’s appearance in 2011, the president has not personally denied the rumors. However, his staff did when he showed up at one event with apparent foundation covering what appeared to be a black eye, a side effect of certain cosmetic procedures. According to his representative, being busy and bad lighting is all it was.

“During a Q&A following a meeting with the President of Kyrgyzstan, Putin refused to answer his absence, instead remarking “It would be boring without gossip,” reported Jezebel.”A CIA source told Gawker that the CIA was pretty sure that the Russian President was sick with the flu and that because he’s very taken with people’s perception of his manliness, he had his people keep it low.”

Conversely, reader Kenny Llamastine joked about the source saying, “If the CIA thinks he has the flu, the one thing he does not have is the flu.” Another reader posted a picture of Putin aside actor Toby McGuire, showing the similarities in the two and another reader called the president “pretty shiny.”

The irony that the “man’s man” may have had cosmetic procedures, be it Botox or a facelift, seemingly makes the statesman more feminine than expected. Isn’t it women who fight aging and not men so much? Whatever the answer, the public and media will be keeping their eye on the president. “When Putin disappears for a month, we will finally know he got that Brazilian butt lift,” reports Jezebel.