Farrah Abraham Got the Worst Lip Injections of All Time 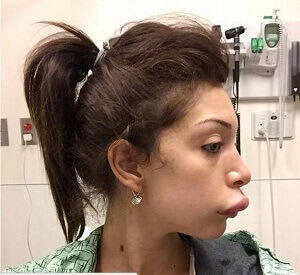 Farrah Abraham has another 15 minutes of fame.

Since TMZ reported how the reality television Teen Mom star got what “could well be the worst lip injections in the annals of medical history,” in a previous Plastic Surgery Portal report, top plastic surgeons Terry Dubrow and Paul Nassif have taken on Abraham as a patient.

No novice to plastic surgery, Abraham has been quite open about her reportedly having more than one breast augmentation and chin replacement, which she needed to have removed a year after the initial implant. Originally excited about lip collagen injections, the celebrity called it “something fun” and “not permanent.”

The star might have thought better about opening her reportedly 10-time larger upper lip until after a successful surgery, rather than face the public shame she is forced to now. But maybe that is what Abraham wants, another 15 minutes of fame.

The television hit Botched is seen throughout the United Kingdom and the United States, giving Abraham an even larger audience than when she starred on the original MTV hit reality series 16 and Pregnant. Also starring in the Teen Mom spin-off, Abraham had gained a large following, especially since she was a single parent following the death of her child’s father rather than paternal abandonment. The constant tension between the teen star and her openly critical mother, played out in front of millions, gaining Abraham and her daughter, Sophia, much public attention.

Saying the star “may need help with” her failed surgery, Dubrow hinted at the notion of being the one to help Abraham. “We can’t talk about that but let’s assume that we may be involved with that at this point,” he said. Assuming she will indeed be on an April episode of Botched, Abraham’s fans are sure to tune in to what will surely be another 15 minutes of fame for the media personality.