Fact or [Pulp] Fiction: Did This Superstar Have Plastic Surgery? 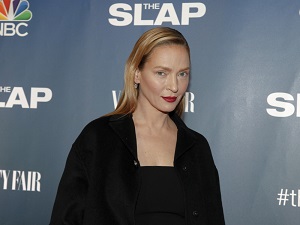 The star of NBC’s new miniseries The Slap, Uma Thurman recently caused rumors to swirl over her new appearance. After Ms. Thurman strutted her stuff at a red carpet event in early February, media outlets, medical professionals and fans all began to discuss the possibility that she had undergone one or more plastic surgery procedures. While most people agree that Thurman looks amazing, experts and commentators disagree on how the actress achieved her new look. Here are a few doctor-suggested signs that a celebrity may have undergone facial surgery:

Experts say that a V shape to the face is a common sign that someone has undergone face and neck lift surgery. During these procedures, the skin and facial tissue is thinned out and pulled back toward the ears and neck. The result is a more angular shape to the face, which often takes the form of a V.

Another sign that a celebrity has undergone plastic surgery is a thinner look to his or her skin and facial features. Some doctors have suggested that Ms. Thurman’s eyelids appeared thinner on the red carpet because fat had been removed from the face. Additionally, a thinner appearance to the nose can be the result of a recent rhinoplasty procedure.

Frozen Look to the Face

Botox can do wonders to improve one’s appearance, removing the wrinkles and fine lines that accompany the aging process. However, when performed by a less-than-skilled injector, this treatment can create an unnatural, frozen look to the face. If a celebrity can’t move one side of his or her face, the odds are good that he or she has undergone Botox or another procedure in the recent past.

Of course, plastic surgery isn’t the only way to alter your appearance. Even changing your hair slightly or altering the angle in which you’re photographed for pictures can have a huge impact on how others perceive you. Additionally, women may achieve dramatic results by using different shades of makeup and undergoing less invasive treatments such as chemical peels, laser procedures and Botox. As of now, experts are torn on whether Ms. Thurman had surgery or simply changed up her look.

It’s no secret that some plastic surgery procedures yield better results than others. If you’re thinking of pursuing plastic surgery, do your research regarding doctors and treatment options to ensure the end result is everything you hoped it would be.

If you or someone you know would like more information about plastic surgery and how to treat it, please feel free to schedule a consultation or contact one of our representatives today!