The 'Facelift Bungee': A $25 Botox Alternative? 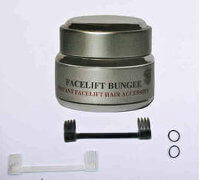 Each year Americans spend millions of dollars combating facial wrinkles with dermal fillers like Botox, collagen-restoring subdermal heating, and face-lift operations; but one woman from Florida has made a product she believes can replace these skin-tightening treatments for less than $30. Kimberly Aschauer claims her “Facelift Bungee,” a device consisting of two small combs and a piece of elastic, can take ten years off your appearance in only thirty seconds. While the Facelift Bungee has a growing following and recent appearances on the Today Show and ABC News, some cosmetic experts are skeptical of the device’s effectiveness and warn patients against long-term use.

Like most inventions, the Facelift Bungee was created out of necessity. “My son was getting married and I went for plastic surgery consultation, and the price was outrageous, so I created this out of pure panic,” Aschauer told ABC News reporters during a recent interview. She scoured her bathroom cabinet and MacGyver-ed the first prototype of the Facelift Bungee. Aschauer braided the hair along her sideburns, providing traction for an elastic band to be clipped in, wrapped around her head, and then fastened to an identical braid on the other side. Tension from the elastic pulled skin around her eyes, forehead, and cheeks tighter, giving her a lifted look.

The retail version of the Facelift Bungee is just as simple as the first device, containing two four-toothed combs connected by a stretchy band. Because the elastic hugs the head, it’s easy to conceal with medium length or voluminous hair. The Facelift Bungee is cleverly packaged in a round jar similar to those used for skin cream, and colors range from flat black to a tan colored “nude.” Reviews call it “Spanx for your face” and early adopters claim donning the bungee has become a vital step in their daily beauty regimen. The only downside noted by Aschauer is the potential of a “pony-tail headache” caused by the constant scalp tension, but some cosmetic experts have further concerns.

Dr. Douglas Hendricks, a Newport Beach plastic surgeon, was asked his opinion on the Facelift Bungee by the The Orange County Register, and stated, “Since this device puts traction on only one area of the face, I doubt it can do much to make a noticeable change…the traction is in the wrong direction to get any improvement where it really counts and that is the lower third of the face.” Dr. Hendricks also said users of the bungee risk permanent hair loss from “traction alopecia which is a common problem for women that have constant traction on the hair such as tight braids.”

Another doctor consulted by The Orange County Register, Dr. Terry Dubrow, was more optimistic but hedged towards using the Facelift Bungee as a preview for cosmetic procedures or prop for a brief photo shoot. “[The Facelift Bungee is] great for people who may want to ‘try on’ a facelift before going under the knife or for those who want to look great in upcoming photos to post on their Facebook page.” Other experts speculate that using a device like the Facelift Bungee to tighten skin by stretching it might backfire, leading to quicker accumulation of loose skin and facial wrinkles over time.

While few cosmetic procedures carry a $25 price tag, there are dozens of proven, long-lasting aesthetic enhancements which are extremely affordable through package deals or financing. If you’re interested in learning about wrinkle management through dermal fillers or a real face-lift, contact us today! Our Plastic Surgery Portal team can schedule you a complimentary consultation at a cosmetic clinic in your area!