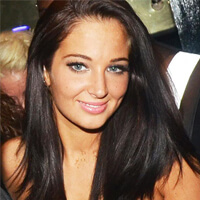 Former X Factor judge Tulisa recently denied undergoing any plastic surgery after her face appeared noticeably puffy and swollen in court in June when she attended a hearing due to allegations that she arranged a drug deal.

The 25-year-old singer had previously denied undergoing rhinoplasty or receiving lip fillers, but her face seemed markedly different from the fresh face she flaunted when she appeared on the pop music scene in 2007.

Neil Sean wrote in his Metro column, The Green Room, that Tulisa denied the plastic surgery rumors, claiming “It is all down to clever makeup.”

Beauty experts claim she could be telling the truth. Celebrity makeup artist Mikey Phillips thinks the dramatic new look could be a product of her makeup routine.

“Tulisa’s makeup has really changed since her early days,” Phillips commented to the Daily Mail. “Now she goes for a heavily contoured look to slim the face and add shape. She also contours her nose, which again slims and adds dimension.

“How you contour your face can totally have a dramatic change to your face. Concealer can be used to lift and brighten and bronzer to shade and define. Lip liner and lip plumping products could be responsible for the plumper pout, but remember, makeup is all smoke and mirrors.”

The singer hid her plumped-up lips as she left a beauty salon last October and attributed her slimmer looking nose to her weight loss last August.

“It’s not a deliberate thing and I really don’t give a toss about being skinny,” Tulisa told the Mirror last August. “That’s just not me. But when I lose weight, it goes from my face and everyone says my nose looks thinner. I swear on my life I’ve not had it done. I’ve literally just lost weight and it goes from my nose!”

Transform Cosmetic Surgery non-surgical director Annemarie Gillett claims that she is not convinced.

“Look at the photos provided,” Gillett commented to the Daily Mail. “Tulisa definitely looks like she has had some kind of temporary dermal filler to her lips and [it] is a very popular treatment with women of Tulisa’s age. Tulisa’s lips looked thinner in earlier pictures.

“The elongated and shiny forehead is a classic tell-tale sign of having injectable wrinkle treatment. Her cheeks also look fuller than in earlier photographs. Her skin looks quite taut and shiny, which would suggest Tulisa has had regular facial peels [or] skin rejuvenation treatments. It appears Tulisa has indulged in non-surgical treatments of late. However, Tulisa is very young and less is more and I would encourage using less product and leaving more time in between treatments.”

“I think Tulisa looks great but I can see the tell-tale signs of Botox, fillers in her lips and possibly in her cheeks too,” plastic surgeon Paul Banwell of the Banwell Clinic commented to the Daily Mail. “She looks like she’s lost a bit of weight in her face as well, which has made her lips look more sensuous and striking.”

If you or someone you know would like more information about plastic surgery, feel free to schedule a consultation or contact one of our representatives today!