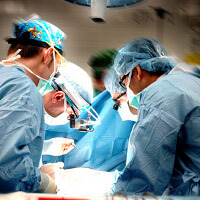 The 21st century has brought amazing facial reconstructive plastic surgery options to a long list of car accident, animal attack, freak accident and fire victims. This summer, 22-year-old Jazz musician Taron Pounds received several successful surgeries that borrowed bone and tissue from his legs to repair severe facial damage after a commercial-grade firework exploded on the left side of his face.

"All I saw was a puff of grey smoke. When I saw Taron he was face down on the ground on his left side,” explained Tammy Cauthoron, Taron’s mother. On Saturday, July 14th, Taron and his family attended a wedding, returned to their Inola, Oklahoma home, and celebrated in the backyard with fireworks. Unfortunately, a commercial-grade mortar shell firework was in the pack. The firework malfunctioned in Taron's hand and exploded in his face, causing massive damage.

Blood shot from his right ear. His left eye was lost. The roof of his mouth was blown away. Most of the bones on the left side of his face were shattered and his jaw bone was split in half. Even his chest did not escape critical injury. Taron was immediately airlifted to Oklahoma University Level One Trauma Center where he was put into a medically induced coma. Two teams of surgeons diligently performed a 22-hour surgery to save his life and began repairing his shattered face.

Because the impact was so severe, the surgeons were forced to borrow parts from elsewhere on Tarons body to repair the intense structural damage in his face. They took bones, skin, veins, and blood vessels from his legs to painstakingly restructure the delicate facial framework around his left eye and cheek. Doctors likened the process to a large puzzle—carefully trying to correctly fit all the pieces together. Initially, they were unable to even identify where his nasal cavity was. The entire procedure was highly complex, sensitive, and had a potentially disastrous outcome. Taron's veins and arteries had to be re-routed and 'hooked up' to a completely different region of the body.

ONE STEP AT A TIME

Having barely survived the ordeal, Taron is recovering day-by-day at Oklahoma University Medical Center. His extensive surgery was one of many. He received a series of follow-up reconstructive procedures using similar techniques that borrowed pieces from his lower body. The sensitivity of the facial structure demands extreme patience from surgeons. Too many surgeries before proper bone and tissue acclamation could cause another collapse.

Although he still has a long road of surgeries ahead of him, Taron is able to talk and is gradually recovering. A tracheal tube helps him breath comfortably and he has unwavering support from his family. Burn injuries and explosion injuries are extremely serious and painful physically and especially emotionally. Please contact the plastic surgery portal if you are interested in learning about reconstructive plastic surgery or if someone you know is undergoing procedures.