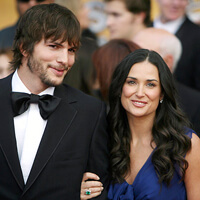 After years of vehemently denying plastic surgery rumors, the Demi Moore plastic surgery story has finally broken! Moore, the star of such films as Ghost and Charlie’s Angels: Full Throttle, recently appeared on the cover of the May 2010’s Elle UK magazine and confirmed that she has had plastic surgery, though she wouldn’t admit exactly what.

"I have had something done, but it's not on my face,” Moore says, likely referring to the breast augmentation surgery that has long been speculated (and really pretty glaringly obvious) since the early 1990s.

"You know what? Maybe one day I'll go under the knife," Moore says. "It just irritates me that people are constantly saying how much I've spent on plastic surgery."

This admission comes as a bit of a surprise from Demi Moore, who as recently as September 2009 denied any allegation of ever having had plastic surgery. What brought about this reversal of position? Maybe it was pressure to keep up with Ashton Kutcher, her much-younger, 33-year-old husband. Or maybe she’s decided that after three children and a hugely successful movie career, there was no shame in following other celebrities who have recently admitted to having plastic surgery. Whatever the reason, there’s certainly no denying that Demi Moore’s cosmetic surgery choices—real or rumored—haven’t tarnished her image in the slightest. At 47, she is one of the wonders of Hollywood, not only nabbing Kutcher as her beau, but maintaining her own youthful sparkle in total defiance of Father Time.

The Normalcy of Plastic Surgery: Demi Moore's Not Alone

Celebrity plastic surgery has always been common in Hollywood, where an impeccable appearance is a big part of a successful career. Rumors of plastic surgery used to cause a scandal. These days, a little nip and tuck is basically accepted as the norm. Even extreme plastic surgery cases, like that of reality star Heidi Montag, don’t really cause the same kind of stir that you would have seen just 10 to 15 years ago.

So, with the taboo of plastic surgery cast aside, the question becomes, “how else has Demi Moore managed to maintain such a sculpted physique and ageless face all these years?” Well, she says that it was mainly due to a strenuous regimen of physical exercise. Some would say that it was a little too intense, and even she admits that her obsession with body image was “extreme.”

"I made it [my body] a measure of my own value," she says. "I tried to dominate it, which I did, and I changed it multiple times over. But it never lasted…"

While the entire Demi Moore plastic surgery story has yet to come out, we can make a few educated guesses as to what she might have had done, based on common procedures for women of her age, and by assessing the readily available Demi Moore before and after pictures floating around the internet.

As a mother of three, Moore has talked about her struggle with post-pregnancy weight. Liposuction could have easily removed the excess fat from her abdomen and midsection. Combined with a tummy tuck, or mini-tummy tuck, and it would have been a great way to regain the flat stomach and sexy curves that Demi is known for. As noted earlier, Moore also underwent a breast augmentation midway through her career, and likely may have had follow up breast lifts or breast implant replacement procedures in the years that followed.

It’s hard to believe that Demi Moore’s wrinkle-free appearance is the result of makeup and healthy living alone. At 47, some would say that she looks even better than she did at 30! In Elle’s recent interview, Moore denied having plastic surgery for her face, such as a facelift or neck lift, but she said nothing about non-surgical cosmetic procedures. Less invasive aesthetic treatments, like Botox, have become enormously popular in Hollywood, and are rapidly gaining popularity elsewhere. An injectable dermal filler, like Restylane or Juvederm, could also be the secret to her remarkably youthful face. Laser skin resurfacing may also have helped erase Demi’s nearly-invisible crow’s feet and naso-labial folds.

As long as she stays mostly mum about her personal beauty enhancements, we may never know the whole story. But one thing’s for certain: Demi Moore’s plastic surgery confession is a sign that plastic surgery and cosmetic enhancement are becoming even more acceptable and mainstream options for women, including moms, of all ages.

If you’re interested in finding out whether plastic surgery or cosmetic enhancement can help you maintain a youthful figure and appearance like Demi Moore, a consultation with a local plastic surgeon can resolve any of your unanswered questions. To find out whether a plastic surgery or a non-surgical alternative might be right for you, give us a call or contact us online today!