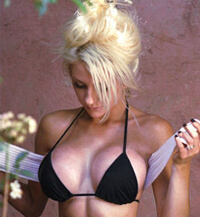 The recent plastic surgery gaffes of Courtney Stodden are leaving the American television personality not only red in the face but purple in the chest.

Courtney Stodden is no stranger to extreme media attention. In 2011, the then 16-year-old Stodden received widespread criticism after marrying 51-year-old actor Doug Hutchison (The Green Mile, I Am Sam). Stodden’s newest attention from the media has not focused on her troubled personal life but her appearances on “Celebrity Big Brother” and her breast implants, which appear to be changing color.

Over the past several weeks, social media has exploded over the confusion regarding the purple hue discoloring the Stodden’s ample DD cup breasts that have recently been repeatedly showcased on the reality television show, “Celebrity Big Brother”. Twitter speculations ranging from Stodden’s overactive body heat to her purported use of aesthetic body paint have been mentioned as the source of the issue. However, it seems the real reason for the purpling of Mrs. Hutchison is the overwhelming pressure of blood around her implants, which are presently are far too large for her frame and the skin that barely contains them.

In a recent article with Heat Magazine, noted plastic surgeon Angelica Kavouni explained her diagnosis of Stodden stating that “The implants seem to have been placed on top of the muscle and may be too heavy to be supported by her skin.”

Kavouni reassures readers that this is not a typical common side-effect of breast augmentation plastic surgery: “The discolouration she shows is not that common and can be due to the many breast blood vessels being unable to empty due to pressure exerted on them by the implants.”

Although Stodden has been reportedly been “treating” her purple breast discoloration by applying make-up to the source, this is only a temporary solution and it not advised as resolution to this kind of serious medical problem. According to Dr. Kavouni, “Placing the implants under the muscle would help with this issue plus a breast uplift procedure.”

Knowing What is Best for Your Body

Dramatic changes to the face and body are sometimes not as rewarding as subtle changes and improvements. Likewise, any patient who has had an unsuccessful plastic surgery procedure should consider seeking further treatment from an experienced reconstructive surgeon. For any individual considering plastic surgery, from media celebrity to stay at home parent, it is important to receive a consultation from a professional who can offer solutions that work best for you AND your body.