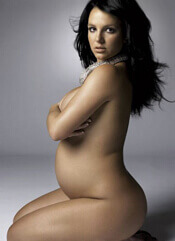 Mothers know what a toll pregnancy takes on the body. Healthy, fit women find themselves faced with a gigantic challenge to lose the “baby weight” after having children. For some, this can be an impossible task. Changes in metabolism and the effects of breast-feeding can contribute to permanent changes in a woman’s shape. For most women, these changes are perfectly acceptable and merely a part of life, but for celebrities, the pressure to re-tone the body into its pre-pregnancy shape is immense. Of course, many celebs get a little help, as "mommy makeover" procedures simply come with the territory in Hollywood.

Mommy makeover plastic surgery procedures such as liposuction, tummy tucks, mesotherapy, and breast augmentation are available to help moms reclaim their figures after pregnancy. Celebrities like Patricia Heaton turn to the tummy tuck to remove excess skin after giving birth. You can work out hard, and diet, but after skin stretches with a growing baby, it often loses elasticity, hanging loosely around the midsection. A tummy tuck removes the excess skin and helps the appearance of toned abdominal muscles.

We all watched Britney Spears go from blond bombshell to post-pregnancy mother with excess pounds around her thighs and midsection, then rebounding back to that slim figure that women across America have coveted. It is difficult to imagine that anyone could regain such a toned figure without a little added help. It’s certainly possible that Britney had a little assistance through liposuction or a similar treatment like SmartLipo, in order to help remove excess fat and enhance her figure.

In addition, rumors have been circulating that the once super-skinny Tori Spelling has gone the mesotherapy route to help firm her body after pregnancy. Mesotherapy uses injections of conventional or homeopathic medicines to eliminate localized fat deposits.

Finally, celebrities including Gwyneth Paltrow have watched the shape of their bustline alter significantly after breast-feeding. There is no doubt that celebrities such as Victoria Beckham have had breast augmentation to lift and firm their breasts after pregnancy. Gwyneth Paltrow has been vocal about the change in her breasts after breast-feeding, and some observers suggest she may have undergone a modest breast augmentation at some point in the last few years.

While women outside of show business might not feel quite the same pressure to quickly regain their figure after having children, many mothers still opt for a little surgical assistance to improve their self confidence and physical appearance. Whether it’s the bust, the bum, or the abs that need a little help, plastic surgery can be the extra boost needed to reclaim the body you once knew. And you don’t need to be a celebrity mom to understand the appeal of such results.

To learn more about the Mommy Makeover or the latest liposuction procedures like LipoSelection surgery contact a inch-loss center near you such as Sono Bello of Sacramento, CA.