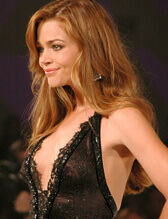 It’s common knowledge that most women want bigger breasts, right? Wrong. Turns out, breast reduction is gaining popularity among women from all walks of life. This surgical procedure not only reduces breast size, but also entails an aspect of reconstruction that creates a shape and contour of the breast that is more proportionate to the body. Check out these Hollywood Celebs that have been rumored to have undergone a breast reduction:

Rumor has it – Drew Barrymore had a breast reduction done sometime in 2006 or early 2007 as seen by the drastic change in her breasts between her ‘06 and ‘07 Oscar appearances. There has also been speculation of a breast lift preformed in conjunction with the breast reduction as Barrymore’s breasts are noticeably perkier in later years.

This multi-talented performer underwent a breast reduction back in 2003 for health reasons. After months of exercise, Latifah had lost close to 25 pounds, but none of the weight from her chest. The large breast size became a heavy burden on her back and shoulders. The 37-year-old actress went from a size F to a double D, claiming that the surgery did much to help “lighten the load” and relieve back pain.

For some celebrities, large breasts can actually be a distraction from their art and the way they wish to be perceived. This was the dilemma facing Janeane Garofalo. Performing as a stand-up comedian, Garofalo noticed that her male audience would pay more attention to her physique than to her act. Prompted by career reasons, the actress opted for a breast reduction surgery, taking her from a D to a B. Just as she’d predicted, Garofalo’s new body made it easier for her to entertain, both physically and mentally.

This well-known television actress from Everybody Loves Raymond openly admitted to having a tummy tuck as well as a breast reduction surgery as a means to combat post-pregnancy sagging. Breast feeding four kids also took its toll. Desperate for her younger body, Heaton turned to plastic surgery for contouring and reconstruction of her breasts - she was delighted with the results.

Wild Things actress Denise Richards has admitted to twice downsizing her breasts over the past decade, winding up with a cup size much more proportionate to her thin frame, and probably closer to her natural breast size. Richards is a good example of celebrity breast reduction as a reaction to an overdone breast augmentation procedure.

Aside from aesthetically pleasing benefits of a breast reduction, the surgery also helps alleviate health problems caused by oversized breasts, including back, shoulder, and neck pain; severe bra strap indentations in the shoulders; poor posture; breathing problems; and chafing in the crease below the breasts.