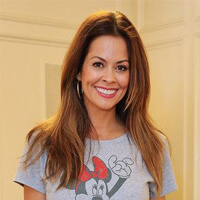 No stranger to plastic surgery, Brooke Burke Charvet claims that she received breast implants in her 20s. However, she does say there is a line to draw when it comes to cosmetic procedures.

“Women who do too much scare me,” Burke Charvet told People in late January. “I’m glad it scares me. I was married to a plastic surgeon, so I’ve seen it all. If a woman has done a bit of work, you should never know.”

In addition to the breast implant surgery Burke Charvet received in her 20s, she also underwent a second plastic surgery years later to get smaller breasts.

Burke Charvet comments that the real secret to looking and feeling young is making sure to exercise and eat a healthy diet.

“We try to eat a Mediterranean diet, lots of greens, lots of fish, lots of vegetables,” Burke Charvet told People.

The 42-year-old mother of four recently overcame a thyroid cancer scare. She underwent surgery back in December 2012 to remove a benign tumor in her throat. She claims that exercise is the best antidepressant.

“I’m totally working out harder than ever before, but I’m doing it in a smaller quicker way,” the Dancing with the Stars host told People. Her workouts are intense but never exceed an hour.

Burke Charvet has released a line of highly rated fitness videos over the years and revealed her diet, workout and weight loss secrets in her DVD Brooke Burke Body: 30 Day Slim Down. With her new fitness minded lifestyle, she now feels more fit and better than ever before.

“Physically, I feel better than I did in my 30s,” Burke Charvet told People. “I know my body better, how to dress my body and I have a better sense of style. I am also more experienced.”

Burke Charvet recently released her memoir, The Naked Mom, detailing how she juggles the various aspects of her life, from motherhood to marriage to fitness to a high powered career.

Want to learn more about plastic surgery? Please feel free to schedule a consultation or contact one of our representatives today!