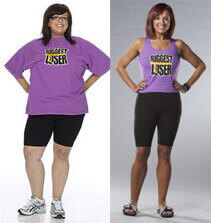 Most people know Amy Cremen from her participation on "Biggest Loser: Families" in fall of 2008. A sweet, humorous brunette in her mid-20s, Amy Cremen kicked off the show's 6th season at 239 pounds. When Cremen was eliminated in week 10, she had lost more weight than anyone else in the Biggest Loser cast thus far; and by the season finale in December, Cremen had lost 104 pounds in total! Now, a year after Amy Cremen's Biggest Loser run—and weight loss win—PlasticSurgeryPortal was able to catch up with this young powerhouse of hope and inspiration, and hear about her recent plastic surgery experience with one of our network's elite cosmetic surgeons: Dr. Michael Freedland.

"I had always known that I wanted to have some plastic surgery..."

In the year following Biggest Loser, plastic surgery wasn't far from Amy Cremen's mind. She returned to her native Michigan and continued actively dieting, exercising, and fighting the forces of flab with great success! However, in spite of her hard work, Cremen was still bothered by the presence of loose, sagging skin on areas like her abdomen and chest. "I felt more uncomfortable in my new skinny body than I did in my heavy body and I was once again not happy."

Most people who undergo dramatic weight loss in a relatively short period of time will experience loose, sagging skin as a result. Oftentimes plastic surgery is the best way to remove this excess skin and allow weight loss patients to achieve a slimmer, more toned physique.

"I knew I was in great hands [with Dr. Freedland]"

To fully realize her weight loss and physical fitness goals, Cremen decided to seek out the advice and assistance of an experienced local plastic surgeon. Cremen scheduled consultation appointments with five different Michigan plastic surgeons, but ended her search after meeting with Dr. Michael Freedland in Bloomfield Hills. "After my consultation, I knew that Dr. Freedland was definitely going to be my doctor...He is so knowledgeable in his field and he makes you feel very comfortable in your decisions and the suggestions that he makes."

In private practice for about 15 years now, Dr. Freedland is well-respected as a sensitive, skilled plastic surgeon in greater Detroit. He is currently a member of the American Medical Association, the American Society of Plastic Surgeons, and the American College of Surgeons. Dr. Freedland's past medical training includes nearly ten years of back-to-back surgical residency and fellowship programs, and he has co-authored several published studies on plastic surgery research and techniques. In Cremen's words, "Dr. Freedland knows exactly what he is talking about".

"My consultation was all I was expecting and more."

Cremen was extremely pleased and very reassured during her consultation appointment, and confirms now that she made the right choice with Dr. Freedland. "Dr. Freedland actually spent almost two hours with me, going over every single thing there is to know about my upcoming surgery." Dr. Freedland's clinical staff of helpful, highly trained individuals also go out of their way to make patients feel comfortable, which Cremen could attest to as well. "Dr. Freedland's office was full of the most positive and uplifting people I have ever met in an office. Most of them have been working with Dr. Freedland since the beginning of his career and I thought that was pretty impressive."

According to Cremen, she went in for her appointment with a clear idea of the plastic surgery procedures she wanted, and Dr. Freedland's additional insights and recommendations helped her feel completely confident in her final surgical plan.

"I am truly amazed at the work that Dr. Freedland performed on me."

Altogether, Dr. Freedland performed liposuction on Cremen's inner and outer thighs, a tummy tuck, and a combination breast lift and breast augmentation. After Cremen's surgery was over, Dr. Freedland's office remained in touch and helped her achieve a smooth recovery. "Dr. Freedland and his staff were very attentive to my post-op needs and accommodated me in any way that they could."

A month after surgery, Cremen was already back on the treadmill and reveling in her newly enhanced physique. "When I look in the mirror, I still cannot believe it's actually me. My confidence level has gone up a million percent...I feel unstoppable!" Not only did the plastic surgery help boost Cremen's self-esteem and streamline her figure, it motivated her to keep after her dieting and exercise goals. "I feel more confident to be able to lose the last 15 pounds and run the Detroit Marathon next fall!"

For other individuals or "Biggest Losers" considering weight loss surgery or body contouring surgery in Michigan, Cremen would "absolutely!" recommend Dr. Freedland. And if Cremen decides to undergo plastic surgery again in the future? "I most certainly would return to Dr. Freedland for more plastic surgery. I don't think I would trust anyone else."

Cremen's Tip: "don't pick a random doctor out of the Yellow Pages"

Amy Cremen emphasized Dr. Freedland's slogan "Do Your Homework" when asked what advice she would give other prospective patients. "Make sure that you choose the doctor that is right for you. Search credentials, do research..." and, we would add, try and view before and after photos, inquire about financing options, and come to your consultation prepared and informed.

In order to help patients make smart choices, PlasticSurgeryPortal clearly displays the credentials of our network's surgeons on their individual practice pages. Furthermore, PlasticSurgeryPortal only includes board-certified surgeons who have undergone specialized training in plastic and cosmetic surgery, like Dr. Freedland. If you'd like to schedule your own complimentary consultation with Dr. Freedland in North Detroit, MI, and undergo plastic surgery with the doctor Amy Cremen calls "the most experienced in his field," contact us today to set up your appointment!