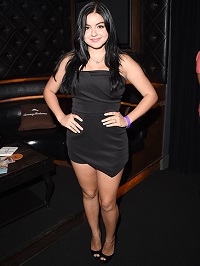 Taylor Swift is no stranger to Internet rumors. Most frequently, bloggers and pop culture commentators are prone to speculating about Miss Swift's love life and latest romantic entanglements, such as the recent hoopla surrounding Swift being seen canoodling with movie and television star Tom Hiddleston. More recently, however, rumors of a different kind have started to circulate about Taylor Swift, specifically that she may have undergone plastic surgery to enhance the size of her breasts.

Amidst these swirling rumors, Taylor Swift suddenly finds herself with an ally in the form of "Modern Family" star Ariel Winter. During an appearance on the "The Talk," Winter advocated for the benefits of cosmetic enhancement. Not that she, or really anyone at this point, knows whether or not Swift went under the knife, but Winter stood up for Swift's ability to do whatever she wants with her body, regardless of what people say.

As you may recall, Winter found herself the subject of similar discussions after she underwent breast reduction surgery last year. Following her much-publicized procedure, Winter appeared on the red carpet in a dress that left her surgery scars visible.

The Internet went wild, with photographs of Winter in her revealing dress popping up on numerous sites. But Winter herself claimed that the dress was chosen on purpose, specifically to show that she had no shame about her scars. Moreover, Winter has consistently criticized pop culture watchers who demean women and criticize their appearance online, labeling them as bullies.

Given these credentials, it's no wonder that Winter has planted herself firmly by Swift's side. If Swift, or any woman for that matter, wants to make a change to their body that will make them happy, why shouldn't they?

This reasonably new philosophy regarding plastic surgery has resulted in millions of people, particularly Millennials, deciding to undergo cosmetic enhancement. Now more than ever before, plastic surgery is seen as a means to take control of your appearance and change the elements that you don't like. Rather than a practice that is shameful or vain, cosmetic enhancement is viewed as a tool of self-empowerment, giving confidence to people in ways that are otherwise unachievable.

None of this is to say, however, that Taylor Swift definitely underwent plastic surgery. For now, the music superstar is keeping mum about any work that she may or not have had done. And until she confirms otherwise, it's perhaps best to take Internet rumors with a grain of salt. Or in Taylor Swift's case, several grains of salt.