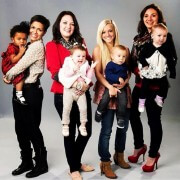 According to Dr. Michael Salzhauer, AKA Dr. Miami, "Kailyn had a Brazilian butt lift and a tummy tuck.”

Lowry’s decision to undergo the procedures has caused some friction with co-star/former-friend-turned-social-media-foe, Janelle Evans. After the pair exchanged some subtle barbs, Evans decided to walk away from the drama entirely.

Evans posted, “Sometimes you just have to block people in life that you once believed to be your friend.”

When a fan tweeted at her to repair the relationship with Lowry, she replied, “I’ve always been the black sheep of the group, it's all good. I'm use to it now.”

The trio aren’t the only celebs getting attention for recent cosmetic enhancements. According to Dr. Kishan Raichura - a cosmetic doctor and injectable expert at IGDP dental in London –it appeared that Kim Kardashian had gone under the knife, suggesting that the work was done to achieve a "more sculpted look".

The biggest difference? The Teen Mom stars are very open about their procedures, while Kim K is arguing that she hasn’t had any additional work done since the birth of her baby boy, Saint West.

On her social media pages, Kardashian spoke out. "No I don't do fillers or Botox when pregnant like some tabloids are reporting, you would have to be really sick to endanger your child like that!" She explained.

Many people aren’t fans of celebs getting cosmetic enhancements, claiming that it sends an unhealthy message to young women instead of teaching them to love their bodies.

However, Salzhauer disagrees with those who would criticize the idea of plastic surgery for young individuals or celebrities.

"People look at women in their early 20s having plastic surgery and they say, 'Oh they're too young for that,' but really that's not true, it's not about age. It's about what has your body been through and what can we do to improve it."