People Speculating on Hillary Clinton's Appearance Rather Than Her Politics 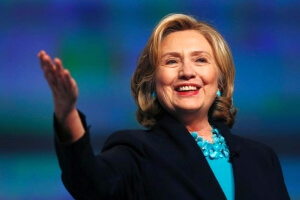 The former United States Secretary of State who is currently running for president going under the knife before hitting the campaign trail is trivial in the grand scheme of themes. Nonetheless, gossip media outlet Radar Online is bringing up the subject.

"Hillary Clinton looks like the campaign trail is agreeing with her," says plastic surgeon Dr. Anthony Youn, who has never treated Clinton. "Her skin looks smoother and her face looks younger than it has in years!"

Chiming in on Clinton’s appearance, Dr. Susan Evans agrees. "It appears that Hillary Clinton has done something, rightly so, as she starts on the campaign trail,” says Evans, a L.A.-based plastic surgeon. “There is a tightening in the jaw lines, under her eyes and cheeks."

Youn speculates that Clinton has had “a series of minimal-downtime chemical peels, like the ZO3 step peel," and Evans—who also has never treated Clinton—points out that “her under eyes were loose and her jaw line has marionette lines with loose skin throughout in the photos from a few years back."

The LA Times reports any plastic surgery talk is just smoke and mirrors, calling Clinton’s refreshed look a matter of “flattering lighting and professional hairstyling.” Recalling the 67-year-old’s recent YouTube presidency announcement, in which the former first lady “is vying for the most powerful post in the free world with jowls, face creases and a less-than-Pilates-toned physique,” the California newspaper claims Clinton is surgery-free no matter the rumors.

“All of us who were taking bets on whether she'd get a whole facelift or simply Botox herself into generic acceptability can eat our words,” says the LA Times. Bringing up the North American culture where female aging is taboo and should remain a private matter, Clinton’s age is absolutely necessary regarding her present and future position, since with leadership inevitably comes crow’s feet.

“There's no substitute for it, and no shortcuts. Generally speaking, you can only really achieve it by getting older and eventually getting old,” reports the LA Times. “That's exactly why Clinton's willingness to age in front of us is both commendable and crucial. Society is unlikely to stop valuing women for their youth—that's just the biological imperative at work.”

However, there is no reason why a woman, even a presidential candidate, cannot age gracefully, according to the California plastic surgeons. "It looks like Hillary has used a new filler, such as Voluma," says Evans. "This is a filler with thinner Hydrochloric acid and would give her face that lift that it looks like she’s had. Overall, she has a smoother and tighter look."

Like the LA Times, Radar Online reports the doctors agree that “it does not appear that she has had a facelift” but rather high-end medical products are the reason for Clinton’s refreshed look. "She also is likely using medical grade skin care product, such as prescription strength Tretinoin," Youn presumes. While all eyes will remain on Clinton until November 2016, there are sure to be countless more rumors on the former first lady, from her appearance and emails to (eventually!) her politics and more.