Kylie Jenner Rumored To Be Getting More Plastic Surgery 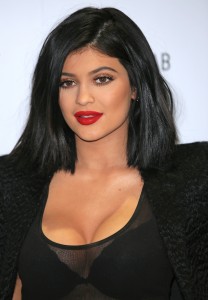 For years now, the Kardashian’s and Jenner’s have been cultural touchstones in the world of fashion and beauty. Most recently, the youngest member of the family, Kylie, has been getting in on the act, trading in on what is arguably her most famous feature, her lips, and creating her personalized line of lip kits. Before they were even officially released, the Kylie Lip Kits were a hit, selling out on November 30th in a matter of minutes. And then, not to be outdone, the kits completely sold out again after the restock two weeks later.

Without question, Kylie’s fans believe that the 18-year-old holds the secret to making lips look their best. Yet Kylie’s own lips are getting help from something other than her line of beauty products, as the young woman has openly admitted to getting fillers in order to plump up her lips.

In general, most plastic surgeons caution younger women about getting cosmetic enhancements. So is Kylie’s popularity sending a negative message to young women? Perhaps. According to experts, seeking plastic surgery at a young age can contribute to a type of body dysmorphic disorder wherein women continually undergo more and more procedures in order to attain the “perfect” look. Even if it doesn’t lead to dysmorphia, plastic surgery can be a dangerous journey to start on before the body is even done developing.

Although there may be some downsides to young celebrities extolling the virtues of cosmetic enhancement, there is an inherent positive message as well. Whether or not Kylie Jenner, or any celebrity for that matter, states it outright, the notion that young women can be empowered to correct perceived physical flaws is generally uplifting. It shows that young women have the ability to fix aspects of their appearance that they don’t like and that everyone has the right to feel comfortable in their own skin.

As with most things in life, cosmetic enhancement is usually only a problem when people go overboard with it. Unfortunately, this fact makes the recent rumors about Kylie Jenner potentially troubling, as the teen was recently spotted visiting a cosmetic clinic in Los Angeles. Although it’s not yet known what procedures, if any, Miss Jenner was having done, this trip could signal that the teenager is seeking cosmetic enhancements in addition to her lip fillers. If Kylie Jenner is contemplating further enhancements, hopefully, she is conscious of moderation, as an excess of procedures could damage the positive message that she brings to young women.