Kim Zolciak Has Had Plastic Surgery Everywhere BUT Her Face 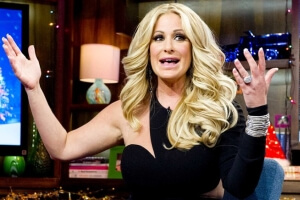 That is the rumor regarding Kim Zolciak denying she had a full facelift according to E! The blonde beauty and former Real Housewives of Atlanta star admits to “some parts of her body nipped and tucked, but the mother of six insists her face has never been under the knife,” reports the celebrity news media outlet.

The 37-year-old took to Twitter to deny a recent report claiming that "top doctors" were alleging she had a full facelift was bogus."This is ridiculous! Top doctors my a**!" tweeted Zoliack, adding "I have not had surgery on my face period!!!!" OK then, what about Botox? That’s a different story according to Zolciak, admitting without hesitation that she personally feels there is “nothing wrong with it" in a 2009 InTouch interview.

"Some cosmetic enhancement is obvious. A lot of times, the people who aren't talking about it are the ones who look horrible,” said Zolciak, adding she began Botox treatments at 25-years-old for chronic migraines. “I recommend that to anybody."

But don’t get her wrong -- she also approves of alterations for medical purposes. When it comes to her nose for example, Kim says "I would love a nose job, but I'm scared.” She has not feared going under the knife for what she considers maintenance after giving birth to Kane and Kaia, her 19-month-old twins. With “multiple breast augmentations and a tummy tuck,” Zolciak says, “I would do just about anything to maintain myself."

Not humble at all when it comes to setting the record straight, Zolciak says that after the surgeries she felt like she was but 20 again. "My surgeon didn't change my size, I'm the same size 4 I have always been,” she wrote with an expletive. “YES I'm a size 4, he simply fixed my hernia, repaired my muscles and gave me the most incredible set of tatas EVER!"

A late 2014 E! report reveals Zolciak selling some of her success to a cleanse, attributing the purification process as a part of how she got back her perfect waist. "It’s not fat you drop, it's the junk in our gut!,” she claims. But the workout queen made sure fans knew she works as hard as the surgeons who sculpted her tight shape, writing "I had a hernia I needed repaired as well as my muscles so don't get it twisted for you lazy a***s that sit on the couch and think I look this good from a surgeon you are now set straight! Enjoy!!"

Giving Kaia and Kane credit for helping her slim down, Zolciak says that carrying two is far different than one. "I think with twins that every little morsel of food that you eat goes to the baby. I made two human beings at the same time and I gained 50 pounds … I think they took it from me."

While honest about so many other areas of her body and weight, one wonders why would Zolciak would lie about facial surgery. And even if she is, the bottom-line is she looks good and that is why her American fans adore the Atlanta housewife.