Kaley Cuoco is Latest Celebrity to Open Up About Plastic Surgery 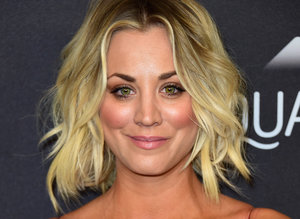 For the last several years, "The Big Bang Theory" has been the highest-ranked comedy on television, and now one of the show's stars has admitted to undergoing plastic surgery.

Kaley Cuoco, who plays the perky actress-turned-pharmaceutical rep on "The Big Bang Theory" is no stranger to the spotlight. She has been gracing the small screen for over a decade, since playing the titular role in "8 Simple Rules for Dating My Teenage Daughter" in 2004. But now Cuoco is finding herself in a different kind of spotlight, as she recently opened up about her experiences with cosmetic enhancement.

If you've noticed that Cuoco has looked differently on "The Big Bang Theory" this season...well, that's probably just your imagination, because the plastic surgery in question happened a while back. According to a new interview in the December issue of "Women's Health," Cuoco admits that she had work done on her nose and breasts years ago. And far from regretting it, Cuoco exclaims that it is one of the best decisions she has ever made.

Celebrities Opening Up About Plastic Surgery

If you're keeping score at home, then you know that Kaley Cuoco is just the latest celebrity to come clean about going under the knife. In the last year, a number of celebrities, including Ariel Winter, Iggy Azalea and Chelsea Handler, have all opened up about their cosmetic surgery experiences.

This trend is a far cry from decades past. Years ago, talk of plastic surgery in Hollywood was largely verboten, leaving fans and pop culture watchers to simply speculate about whether or not their favorite celebs had had work done. Nowadays, however, more and more celebrities are sharing their plastic surgery stories.

So why the change? For starters, you can't downplay the role of social media. With the rise of Twitter, Facebook and Instagram, celebrities feel closer to their fans than ever before, leading to them being more open about their day-to-day experiences.

Also, empowerment is a big factor. Increasingly, plastic surgery is being seen as a way to rectify elements of people's appearance with which they’re unhappy. By talking about cosmetic enhancement and endorsing it, celebrities are letting their fans – especially young women – know that it's okay to take proactive steps to feel comfortable in their own skin.

While Cuoco’s plastic surgery admission caught some by surprise, others had been suspecting that she’d had work done. And that suspicion isn’t limited to Kaley Cuoco. In fact, there is a widely held belief that everyone in Hollywood has had at least some work done. So the only question now is: Who will be the next celebrity to come forward?