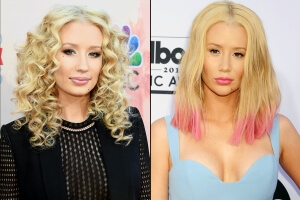 Though she seemingly has a perfect life, Amethyst Amelia Kelly still feels like some days she wants to crawl into a cave, she told Australia’s TODAY.

Known more popularly as Iggy Azalea, the Australian rapper and model—who gained America’s attention with hits like “Fancy” and “Black Widow” and recently became engaged to L.A. Lakers star Nick Young—has made it clear she has nothing to hide regarding the plastic surgery rumors surrounding her.

Since her “Pretty Girls” duet with Britney Spears at the 2015 Billboard Music Awards, the 25-year-old beauty spoke candidly to the top Australian media outlet. “Some days I want to crawl in my cave because I don’t feel confident at all, and then other days I feel great,” she said from her Hollywood studio in the satellite interview. “I think it’s like that for all human beings, not just young women”.

There is no doubt the Sydney-born rapper seemingly has it all with her admission to insecurities only making her more approachable. Azalea admitted that it’s anyone’s goal to be 100% confident in themselves on a daily basis, “but but I don’t know if it’s humanly possible for anybody” and that it’s important to embrace your flaws. Iggy is clearly able to see the silver lining in the mirror’s reflection, believing “the things about you that you sometimes feel bad about can empower you.”

But her definition of empowerment is being questioned by tabloids. “A source tells US Weekly that the Aussie native got both a nose augmentation and a chin implant just a few months after she admitted to getting a boob job,” reports the gossip-media outlet. In an April 2015 “Vogue Goes Shopping with Iggy Azalea for Her New Shape,” interview, Azalea spoke honestly about how keeping it real for the next generation is important. “At first she resolved never to discuss this publicly; she didn’t want girls—so many of her fans are barely high school age—to feel bad about their own bodies,” reports Vogue.

With more reported surgeries from her neck up, US Weekly assumes she has had both her chin and nose sculpted. “The latest procedures were done very recently, and the source adds, ‘She loves the results! She wasn’t happy with her nose for a long time, so after the boobs she wanted to get that taken care of and then got the chin done at the same time.’”

Using social media as her own news report, Azalea counters the controversy surrounding her supposed surgery with some tweets. "I know, I know. But I'm just like huh!? I've got multiple nose jobs, chin jobs, facelifts, am prego..." she tweeted. Continuing with the evidence that she would be unable to leave her house if she was having such surgeries, Azalea only complimented man-made beauty procedures. "Cosmetic surgery can be great, happy with mine," she said. "What's wrong is ppl body-shaming others. Just live your life! :-)”

Azalea’s advice is empowering for many who keep surgery a secret, ironically thinking less of themselves while trying to raise the opinions of others. So take it from the rapper: do whatever suits your fancy.