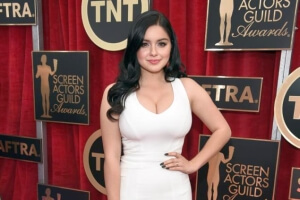 Speaking with Glamour, actress Ariel Winter articulated how having plastic surgery had nothing to do with aesthetics.

Quite the contrary, women pay thousands of dollars to have the size breasts the Modern Family star no longer wanted because of the physical pain she suffered. Known as Alex, on the five-time Emmy Award winning show, Winter has grown up in front of America since 2009, seemingly growing from a flat-chest to a size F overnight. Coming from a family of large breasted women, the 17-year-old said the sudden spurt her decision to reduce her breasts came suddenly.

While swimsuit shopping with her cousin, Winter found herself unable to buy a suit, saying she couldn’t “go to a party with my friends and wear the same thing,” causing her to “completely to cover up otherwise I will look a certain way I am not intending to look.”

And it wasn’t just hanging out casually at a pool that was a problem, walking the red carpet was also an concern before her June surgery that reduced her chest size from a 32F to a 34D. Though she appeared confident, Winter expressed to Glamour it was all an act, something she is obviously very good at. “On [red carpets], I just said to myself, ‘You have to do your best to look confident and stand up tall, and make yourself look as good as you can in these photos,’ because everyone is going to see them,” she said.

Beyond seeing her were words, statements of ridicule with critics claiming Winter wore dresses far too mature for a teenager. However, with breasts that large, style has it most dresses will be low cut to reveal the coveted cleavage. “It was really hard. There was so little that I could wear that was age-appropriate,” said Winter, adding “Every article that has to do with me on a red carpet always had to do with ‘Ariel Winter’s Crazy Cleavage!’ Or ‘Ariel Winter Shows Huge Boobs At An Event!’ That’s all people would recognize me by, not, ‘Oh, she does great work on Modern Family.’”

Not only did she have to perform on the carpet, her over-sized chest cost her acting roles. Unable to play a young teenager and not able to play 18 since she is still a minor, Winter had even more reason to consider surgery. But the greatest grounds for going under the knife was the pain, according to Winters who said standing for long period of times hurt. “It started to hurt so bad that I couldn’t take the pain. My neck was hurting so bad and I actually had some problems with my spine,” said Winter.

Often by her side on the red carpet and always by one another’s side on set, co-star Sarah Hyland, also known as Haley, spoke to People, telling the periodical how proud she was of her friend. “It’s been something we have been talking about for a long time,” said Hyland at the recent Nickelodeon Teen Choice Awards. “I’m super happy for her. I’m super proud of her.”