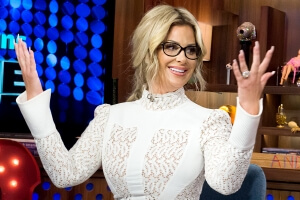 American talk show host and author Andy Cohen’s constant search for the truth gives him a nose for counterfeit comments, according to E!.

And he it smells bad around reality star Kim Zolciak based on Cohen’s beliefs. One of the original Real Housewives of Atlanta, the 37-year-old Bravo celebrity absolutely denies having any work done on her nose and lips. As for her breast and tummy, she has no problem coping to plastic surgery on those body parts since having four children in four years, including a set of twins.

But admitting to that just wasn’t good enough for the Bravo Watch What Happens: Live host Cohen, who notes how he has known the star since her fifteen minutes of fame began in 2008, said the change is obvious. “I was staring at your face for a long time, and it was clear to me that you looked a little different to me," said Cohen of how he peered at her during the 100th Anniversary of the Bravo show.

Rather than keep his mouth shut, Cohen went straight for the plastic surgery jugular on his show. “Tonight you arrive wearing glasses, and I'm thinking, 'Now why is she wearing these librarian-that-can-be-seduced glasses?' Now I realize it is to take away from the fact that you have had a little bit shaved off your nose," said Cohen.

Taking off her glasses to give Cohen a better look, the talk show host would not let up, saying “I really feel that way.” Hoping the truth would come out of the mouths of babes, Cohen asked Zolciak’s daughter Brielle Biermann about her mother’s apparent changes. Pointing to her own nose, assumingly untouched since she is a minor, and then to her mother’s, her best defense was “I feel like they look the same.”

Naa, not the case continues Cohen, claiming she had some of her nose shaved off and added a pout to her already full lips that Cohen is convinced she is lying from. "Andy, I'm very honest with plastic surgery. Obviously I've never hidden anything," said Zolciak. "We all know I do Botox; I'm a big fan of it. My lips are definitely overdrawn. See?" Cohen replied, "They're overdrawn or a little bigger?"

Yaa, still not falling for it, the talk show host called out the reality star one last time. "OK, OK," said Cohen. "I don't know why you would deny it. I will say that."