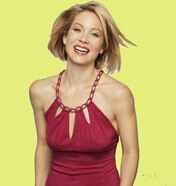 There are few things more frightening than a breast cancer diagnosis, but it can help to know you are not alone in your battle against the disease. These 10 celebrities have undergone various treatments for breast cancer and inspired many with their public battles with the disease. Many, like actress Christina Applegate, have also turned to advanced breast reconstruction surgery to regain their pre-cancer shape after treatment. Without question, new technology and talented doctors are helping women overcome the effects of breast cancer like never before. In honor of Breast Cancer Awareness Month, here is Plastic Surgery Portal list’s of 10 Celebrity Breast Cancer Survivors.

Edie Falco
"The Sopranos" star was diagnosed with breast cancer in 2003, but she did not announce her illness until after undergoing treatment. She kept her illness and subsequent treatments quiet – both from the general public and her coworkers on the set.

Melissa Etheridge
In 2005, this plucky breast cancer survivor showed up to perform at the Grammy Awards with a completely bald head after undergoing chemo treatments. Etheridge also told reporters after her treatment that she completely revamped her lifestyle to help her remain cancer free.

Sheryl Crow
Sheryl Crow was diagnosed with early-stage breast cancer in 2006, not long after breaking up with cancer survivor Lance Armstrong. Crow had been watchful of the signs of breast cancer, since she had a history of it in her family.

Elizabeth Edwards
The former wife of presidential hopeful John Edwards, this breast cancer fighter has been an inspiration to women across the country. Her first diagnosis of breast cancer was in 2004 and returned in 2007. Today, Edwards is living with Stage 4 cancer, which has spread to her bones and other organs.

Kylie Minogue
This popular Australian entertainer was diagnoses with breast cancer in 2005, when she promptly had surgery to remove the lump, followed by chemotherapy. Minogue is currently cancer-free and back to her rigorous performance schedule.

Suzanne Somers
Suzanne Somers made headlines when she announced her breast cancer diagnosis on Larry King Live in 2001. Somers decided to forgo standard treatment in favor of alternative therapies and holistic medicine. Today, she is cancer-free.

Cynthia Nixon
The "Sex in the City" star decided to make her breast cancer battle in 2006 a private one, undergoing a lumpectomy and radiation therapy. Two years later, Nixon made her battle public and became an ambassador for Susan G. Komen for the Cure, an organization committed to winning the battle against breast cancer.

Robin Roberts
The "Good Morning America" anchor was diagnosed with breast cancer in 2007 and underwent surgery and returned to the show one month later. Roberts also went through chemotherapy treatments and is currently cancer-free.

Olivia Newton John
John was diagnosed with breast cancer in 1992 and immediately underwent a mastectomy and chemotherapy to treat the disease. John is one of the original faces of breast cancer survival and is frequently seen at functions to raise awareness of the disease.

Breast cancer is a devastating diagnosis, but many women find a new lease on life after their diagnosis and treatment. Thanks to great advances made in treatments and breast reconstruction surgery, women can return from breast cancer with confidence and the ability to enjoy life to the fullest once again.

If you're a breast cancer survivor interested in the potential of breast reconstructive surgery, we can help you schedule private consultations with board-certified surgeons specializing in breast reconstruction in your area. Feel free to contact us today to set up your appointment.